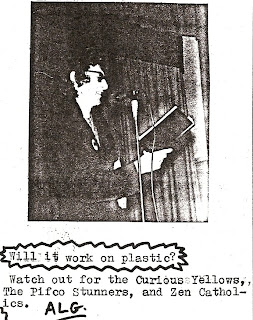 Liverpool Polytech October 19th 1977, John Cooper Clarke the "Punk Poet" performed alongside the Buzzcock's, The New Hearts and The Skunks. 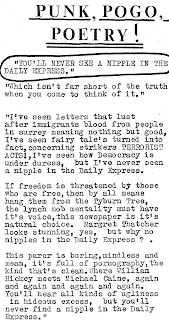 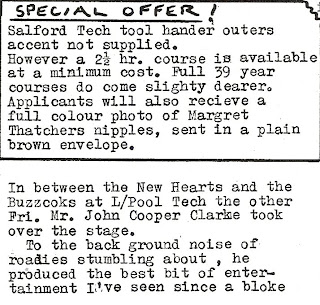 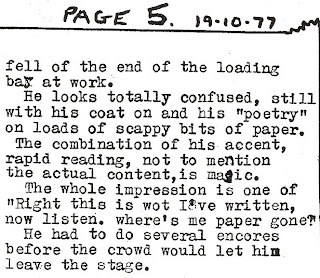 During 1977, John would perform with label associates from Manchester's Rabid label, including Ed Banger and Jilted John. Other support slots included The Buzzcocks, Sex Pistols, Elvis Costello and Warsaw. He inspired his audience on the U.K punk circuit with his good-humored high-speed poetry.
Leaving school at 15, he had a succession of jobs. An apprentice car mechanic, window cleaning, a fire-watcher at the docks, and a lab technician handing out tools to students at Salford Tech. As his popularity grew during 1977 he resigned from this position.

John Cooper Clarke illuminated the punk scene during 1977 with his witty, but opinionated tongue-in-cheek lyrics, and intelligent verse. He always, performed superbly wearing his tight drainpipe trousers and Oxfam jacket, winkle-picker shoes, dark shades and looking like a punk version of Bob Dylan. He soon caught the attention of CBS who quickly signed him up and released his single, "Post war Glamour Girl", which was included on the 1978 debut album, "Disguise in Love". A picture sleeve released in 1978 included Glamour Girl along with, the Kung Fu International track that was recorded live at Eric's club.
The Invisible girls provided backing music for some of the studio recordings, the line up included Pete Shelley from the Buzzcock's and Bill Nelson from Be Bop Delux, with Joy Division's producer Martin Hannett bringing it all together. The band also played on former Penetration, Pauline Murray's solo album.
During the late 80's Johnny Clark went into semi retirement forming a domestic partnership with ex-Velvet Underground singer Nico.

In recent years, his poem "Out of Control Fairground" was printed inside Arctic Monkeys single "Fluorescent Adolescent" CD, which was released on 9 July 2007. The poem is also the inspiration behind the songs video. Another poem was printed inside the 10" release of the same single. Alex Turner of Arctic Monkeys has said he is very fond of Cooper-Clarke's work and takes inspiration for lyrics from his poems. Acts such as the Streets, the Arctic Monkeys and Lilly Allen have continued the tradition of street poetry, by firing off street rhymes with the latest pop sounds.
Take Beasley Street, perhaps one of his finest pieces of work. This anti-celebration of working class Manchester was inherently powerful because it was essentially true and could be applied to any urban context in the late 1970s and 1980s. The lyrics made a direct connection to life for the British working class. But this wasn’t a sentimental journey caught in fading photographs of cheery Northern folk, but a hard-headed analysis of lives wasted, ambitions rotted and the effects of low level but endemic violence, boredom and despair.
The BBC just broadcast this interesting radio documentary about the Manch punk poet http://www. bbc. co. uk/radio4/arts/pip/242oq/

NME quoted the following in 1997 - Clarke is still the role model for any young performance poet not suffering from premature brain death. His Beasley Street remains the greatest piece of writing in the English language.