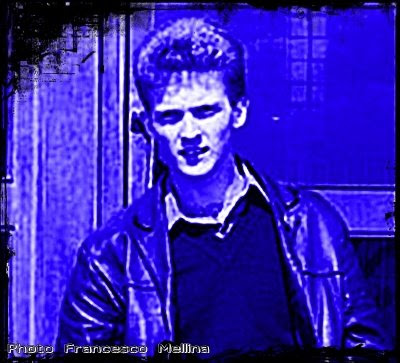 Martin -Would you be interested in assisting me with an interview, and some commentary to describe this exciting period for Liverpool and British Music?
No problem. Fire away
Cheers Rob

Martin - During 1977, Liverpool started to cultivate a style and sound of its own. Can you describe what drove you to be lifted by this creative scene?
Rob - Simply music, and I was at the right age at the right time, Crash Course got to play Eric’s and I saw hundreds of bands their over the years. Initially bands coming out of Eric's were punk, but that changed with Echo and the Bunnymen, The Teardrops Explode, OMD, Wah etc they were more rocky and tuneful

Martin - I know that you were an Eric's club regular before Wah Heat? Did you meet Andy Eastwood and Pete Wylie there? Was Crash Course your first band ?
Rob - Yep, I start pre Eric’s seeing The Runaways in the hot summer of 76 at Roger Eagles Revolution Club in Liverpool.
Until the punk rock revolution I was a long haired Trogg. Andy “Easty” Eastwood and I went to school together, and we formed Crash Course. It was the first band where I played live, the other bands never got out my Mums garage. I would describe the band as a Stones, New York Dolls type of outfit.

Martin - Can you recall any Crash Course gigs?
Rob - Yeah, we once played Southport and CF Mott College in Huyton where Julian Cope went to study, also practicing in the Bear Brand factory in Woolton is now coming back to me.

Martin - Echo and the Bunnymen played their first gig supporting Crash Course at Eric's. Can you describe how the evening felt, was it a packed house? Who organized the gig?
Rob - I think it was one of the talent nights they used to run, 50p to get in, Pete Wylie was mates with Fulwell and Roger Eagle and he got us the gig, it was the usual Eric's crowd, friends and family!! The Bunnymen had a drum machine back then with no drummer, and they played about 3 songs. It was early days for them.

Martin - Describe your Eric’s Club experience?
Rob - Yes, Eric’s was an interesting club, and although the club is profiled as a punk club I was able to see many different bands there, the variety ranged from the Clash, Warsaw, Jamaican dub bands, The Talking Heads and even Dire Straights.

Martin - Things were really starting to flourish with new sounds and bands down at the club as Crash Course was trying to find another direction around the end of 1978. Where did things go with your musical direction from here?
Rob - I met Pete Wylie at Eric’s whilst playing with Crash Course, soon after he joined we split, and then Pete and I went on to form Wah Heat. Pete, Easty and I lived together in a flat in Penny Lane. Wah! Heat was heading for something good and headlined bills in Manchester and Liverpool where U2 and Pink Military actually supported us.

Martin - It was appropriate that Wah! Heat, would perform the last songs on that fateful evening on March 14th 1980. The band members had played an extraordinary role in the Eric’s club recipe. A recipe that would rejuvenate British popular music with a post punk explosion of young energetic bands with the new fresh sound.
Late that evening Pete Wylie prophetically shouts “This is the last song you will ever hear by a Liverpool group in ERICS!” & he was right. He recorded the set & sent a copy to John Peel who later aired these tracks on his BBC radio show as a tribute to this now legendary music club.
Rob - Yes, I was the drummer in Wah Heat on the last night of Eric’s. By midnight the undercover police had infiltrated the club, the house lights went up and the body searches began. Wah! Heats next gig in Liverpool was at Lincolns Inn just round the corner from Eric’s.

Martin - Did you ever get to meet John Peel?
I did once at a music concert that I helped organize at Kirby football stadium [pic below]. I did six Peel session's I think. 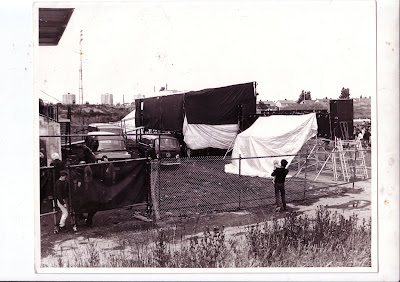 Martin - Can you tell me about the The High Five? I had read that the name was derived from a cult TV show in which alien criminals are sent to Earth, and promptly begin to do battle with the humans.
Rob - Yes, after Wah! Heat I formed The High Five along with Paul Hayes, you can find The High Five on Myspace [link below] but I don’t administer the site. We released singles ''Cold Steel Gang' and a popular song 'Working For The Man'. The band also released an LP named "Down in the No Go" in 1984.

Martin - Are you still in touch with Andy or Pete ?
Rob - Yes, I see them occasionally, but only if I bump into them when I’m out. Pete wants to go for a drink soon, he wants to see a poem that I have written titled 'The Last Night of Eric’s' , it starts off "Guitar twang and negro slang had brought me to the stage once more...." Check out the video featuring my spoken word poem Video [ below]. I also wrote the lyrics to "Hey Disco Joe" the B side of Better Scream and Some Say. And, I am also still friendly with Mike Badger from the La’s.