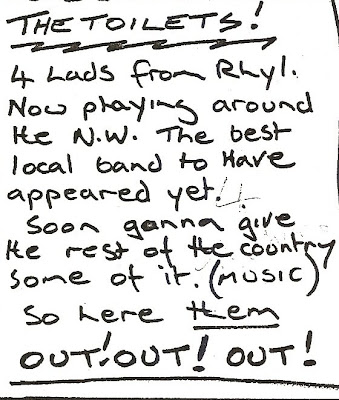 Above clip from Bombsite fanzine issue 5
Few bands left a more distinct mark on the Welsh rock experience than Mike Peters band The Alarm, but few will remember Mike's punk band The Toilets. Prompted to form a band after watching the Sex Pistols play at Quantways in Chester during October 1976. The band formed in Rhyl during 1977 with Mike Peters, Glyn Crossley, O'Malley and Nigel Twist.
Some of the group members worked as bank clerks in Chester. Even here Mike Peters was a nice bloke, and would always greet people with optimism's and a smile. But the group members all embraced the revolutionary, equal-opportunity and controversial punk image at the weekend. Mike's determination and vision was passionate, as he would discuss the day when his band would be recognized as a Welsh rock band. Interestingly, they were followed around from gig to gig by the most loyal, hardest punks in the area, "The Buckley Contingent". Merchant seamen, dockers and miners. These guys were not to be messed with.
We first met Mike Peters in late Spring 1977. Mark, Smasher Dean, my girlfriend and myself were in a bar on the promenade in Rhyl. Mike Peters sitting at the bar talking with some locals. Soon after arriving the whole place exploded in an old western style bar fight after someone mouthed off. The owner tried to break it up and tried to lock the door. We pushed our way out and legged it. On the way back I asked Alg "what did the guy say", he said "I don't know I saw his lips move so I whaled on him". About a week later, we met Mike at Eric's, unaware that it was him in the bar. He explained that the group of guys we had worked over, continually cause trouble with the local punks. And the word around town was they had now got what they had asked for.
No known recordings of the Toilets exist today, although Mike Peters did have a 1977 recording from the Buzzcock's Eric's gig. Regrettably, the recording was stolen from his car in 1980.
Singer, lyricist and guitarist Mike Peters, is now a globally recognized figure of tremendous musical influence, with different variations of the Alarm. But his original band The Toilets were a short lived punk marvel, featuring energetic Clash inspired punk anthems. As Eric's regulars the band performed support for the Clash on October 22nd 1977 and The Buzzcock's and The Fall on November 18th 1977. Sex Pistols, Paul Cook and Steve Jones were present for the November 18th gig. 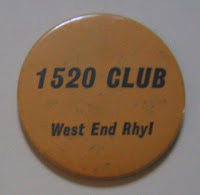 Our band "Why Control " supported "The Toilets" for a few different gigs. For one gig they let us use their equipment. This was unheard of with bands back then, since everyone was getting robbed.
Mike's talent, honesty and passion resonates with me today. The Toilets disbanded after playing their last gig at the 1520 Club in Rhyl on Friday January 27th 1978.
A few months later we watched Mike with his new band Seventeen in a pub on Station Rd as newly formed mod band Seventeen. The place was packed with punks, mods and skins. The sound was tight and very refreshing. We were at the bar when Mike came over and started telling us about the new band the sound and the line up.
click video to review early Alarm live performance

In December 2005 Mike was diagnosed with Lymphocyte Leukemia and is fighting this battle with the assistance of his family and many fans.
Steve Pond described The Alarm in his Rolling Stone review as "simple, forceful music, rambling strings of earnestly poetic images and the conviction that speaking out just might change a few things." What Steve Pond did not understand is that as the black clouds of recession tried to kill a generation. Eric's creative fire exploded with a spirit of do it yourself, do it your way and don't back off.
Hats off to Mike Peters and the Alarm, initially a hardcore punk band, stopped by the mod scene with a band named Seventeen for a while. Matured throughout the '80s before emerging as a successful alternative rock act during the '90s. Mike Peters has achieved the quintessence when it comes to the necessary elements of great rock bands and has continued the 77 spirit with tours into 2008. All the best mate..! 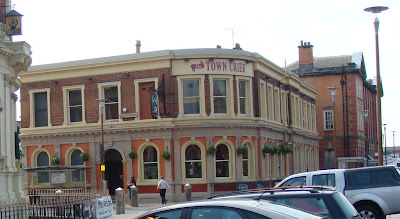 Above; City Road Chester Venue for Seventeen 1978
Email ThisBlogThis!Share to TwitterShare to FacebookShare to Pinterest