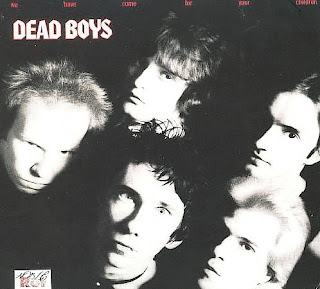 They originated from Cleveland Ohio, as one of the offshoots of a proto-punk band named Rocket From The Tombs, but soon moved to New York and gained a reputation as one of the most important punk bands surrounding the legendary CBGB's club in the late 1970s as the Dead Boys.
In the group's heyday Jeff Magnum, Stiv Bators, Cheetah Chrome and the Boys were loud, brash, violent, and nihilistic, and by the end of 1977 they were touring the UK with the Damned. The Dead Boys took punk rock to new heights with their audience incitements and fast, three-chord songs they produced a sense of havoc and punk rock freedom. Their classic first record, Young, Loud, and Snotty followed, and has made a huge contribution to American punk rock culture. Characterized by Stiv Bator's nasty audience provoking antics, along with the band's aggressive power chord punch, the Dead Boys have earned their title as one of the greatest and most influential punk bands in history. Back in the day their punk classic "Sonic Reducer" offended everyone it was meant to offend and became the band's anthem. The Dead Boys took American punk into a new realm of rock and inspired many bands with their excessive brand of destruction. The band's legacy continues to grow and both Pearl Jam and Guns 'N' Roses have covered their material, and we should expect others to follow. In this Bombsite exclusive Bass player Jeff Magnum reflects on the beginning for the Dead Boys.
The Dead Boys were: Stiv Bators (vocals); Jeff Magnum (bass); Cheetah Chrome, Jimmy Zero (guitar); Johnny Blitz (drums).
Rocket To The Tombs: members included the Peter Laughner and Dave Thomas, who went on to form the legendary Pere Ubu.
The Dead Boys will be remembered as one of the most significant punk rock bands to develop out of the US in the mid 70's. There was an interesting scene blossoming from Michigan and Ohio that included Iggy, the MC5's, old partners Pere Ubu and the Dead Boys. Maybe it was a social, or a new generation of expression. Can you help to describe what it was that assisted the music development?
Jeff: Boredom! I really believe that whole blue collar, rust belt, midwest-stuck-working- in-a-factory-forever- mentality had a huge effect on the high energy bands ya mentioned. Those were desperate times, working some loser job in a nowhere factory by day, and drinking beer in dumpy bars with your friends and bitching about yer life at night. Fed up with crappy hippie
bands and their dull 15 minute jams, some people got creative in this deep misery and wrote great songs and made great albums. Kinda like how "punk" was born outta frustration, well that was a mouthful.
Were there other mid west bands that were just as expressive who have been forgotten over time? Roughly when did you first hear the punk rock term used?
Jeff: I'm not sure I know what years yer referring to, so here's my all over the place answer! In the late 60's a band called Black Pearl made a really good LP on Atlantic Records (SD 8220) that I still listen to. I didn't like alotta the Cleveland bands in the early 70's, the bar bands found brief
success playing bullshit cover songs and dressing up like Peter Frampton, and the Cleveland "punk" bands in the day did nothing for me. Nobody was better than us. I think I first heard the word "punk" in 1976 on an NBC-TV news magazine program called "Weekend". They did a story on the Damned and the Brit "punk" scene.
There was something drawing the garage scene to New York venues, the Mud Club, Harrah's and CBGB's were becoming stimulated with a new type of rock and roll. When or how did you realize that you needed to be part of that movement?
Jeff: Things were not working out for us in Cleveland. Moving to New York was an option that could not be ignored. We got labeled as a "punk" band and things took off and life improved (we got a "manager", a record deal, and a NY audience that loved us).

The chemistry between the Dead Boys and the Damned appeared to blend very well, leading both bands to develop the frontier of punk rock by marrying the US scene and the UK scene together. By November 1977 the Dead Boys were preparing for a UK tour alongside their newly formed alliance. How were your expectations looking forward to playing the UK? Were you aware of the controversial nature of the scene?
Jeff: Don't make too much outta the Dead Boys/Damned "alliance". We opened for them on their second album tour in England, Scotland, and Wales. Nobody had ever heard of us (the 1st Dead Boys LP had not yet been released in Europe) and I thought we blew 'em off the stage night after night. I gotta admit that some of the shows got pretty intense with the kids and their punky ways, but what the hell. I knew they weren't just gonna stand there and watch us. 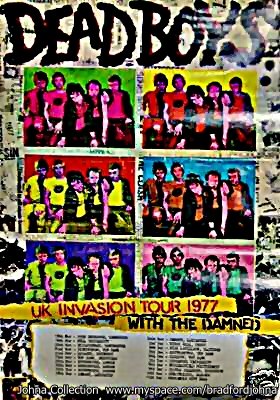 Above; The Dead Boys 1977 UK Tour Poster
By late 1977 many UK regional councils and authorities were working overtime trying to shut down this outrageous youth phenomena called punk rock. The attendance for the Damned, Dead Boy 77 UK tour was affected by these government restrictive mandates. Was this something you were aware of, or had been expecting?
Jeff: Is that for real? Sounds like something the Damned mighta made up to explain their low attendance on their tour. Actually, I remember some punk kids saying at the time that punk was over and done in England, the scene was dead. I just figured attendance was low for the Damned because they (and that LP) weren't very good.

On November 18th you joined the Damned tour in Cambridge England. On November 20th the tour reached Manchester's Elizabethan Room and then on December 7th it was back up north to play Liverpool's Mountford Hall. Was there an incident or something you remember from the tour about your Manchester or Liverpool dates? Do you remember Eric's night club in Liverpool?
Jeff: No.
During your first UK tour did you get to spend time with the Sex Pistols or the Clash?
Jeff: Hell no. They didn't come out and hang with us, maybe because "punk" was an American thing and we did it better.
During your 1976 term playing in NY with the Dead Boys, were you and the others close to the Ramones?
Jeff: Personally, I was never "close" to any of the Ramones. I loved 'em live, and their first 3 albums were great.
You most recent project with the Cyclones see you playing bass on their new records. Is there a tour of some other material being released soon?
Jeff: Cyclones Vin and Dave asked me if I would play on 3 tunes. I did and I had a blast! It's a good rockin' CD and they should be proud of their work!Yes thanks Jeff and thanks again for your contribution to rock and roll.
Above; Dead Boys Sonic Reducer Live