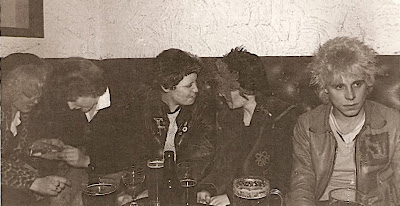 Above; Eric's Regulars Shani, unknown, Janet, Woody, Daisy
Eric's opened on October 1st 1976 on Mathew St opposite The Cavern Club where The Beatles had played during the 60's. Eric's was more than a club that allowed bands to play in Liverpool. It was a necessary avenue for youth energy during a period of regional depression and devastating unemployment. It was a place for young people to escape and be themselves and would help design a Merseyside future. The low ceiling, brick walls and humidity allowed the sound of cheap guitars to blast around the room with exhilarating energy. Whatever you believed or however you dressed you were part of something. Local punks, mods, Bowie, Roxie, Deaf School believers were all educated in Eric's basement. They were learning how to get out and do something, start a band, start a fanzine, start a record label, or design a line of clothing. Downstairs in the basement was the epicenter where young people gathered for the same reason, to be inspired. History remembers the musicians. But, this place was not just for music it was an incubator for entrepreneurial spirit, and from here artistic threads would stream across the planet.
The Sex Pistols Free Trade shows starting in June of 1976 gave the Manchester scene a lift. The London scene was 12 months ahead, and Liverpool had arrived a little late to the party.  It was not until June or July 1977 that a few Eric's homegrown bands - the Spitfire Boys, The Toilets and Brownshirts were ready to tour south to London. Liverpool was following Deaf School, Roxy music, and Art Rock when the anarchic change arrived and almost missed the nihilistic explosion.
Amongst the Liverpool regulars were others who would travel in from Chester, St Helens, Runcorn and North Wales, and had followed the Manchester scene. Spitfire Boy, Paul Rutherford had regularly visited The Kings Road and was enthused by the fresh sounds of the London scene. Eric's regulars were influenced by the nationwide movement and driven by a failing economy. Groups would work out different musical styles and tastes in their garages, bedrooms and even church halls. And, as the sounds developed, their expression flourished, and the artists would discover new creative directions Eric's Club and Roger Eagle were the catalysts that allowed groups of friends to move out of the bedroom and perform front of each other and express their individuality. 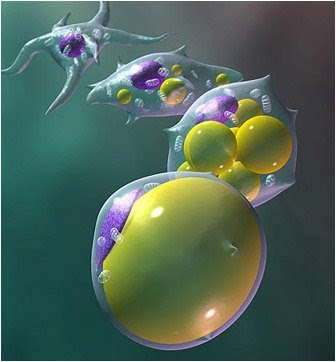 Above; Musical Cell Division into the future
Even bands that fell by the wayside after a single gig, would realigned with other friends and change the recipe, to move the sound to another level.
The Eric's model flourished, because the 50 to 100 early enthusiasts remained constant, and the core kept coming back and built confidence with each other. From November 1976 through the spring of 1978 the Eric's regulars would help launch Liverpool in a new musical direction.
Roger Eagle influenced the new Liverpool sound as he favored a type of music and style, so as early as 1977 their were signs of Liverpool post punk branding beginning to develop. Liverpool and Eric's punk bands like the The Toilets, The Spitfire Boys, the Crucial Three, the Brownshirts, Radio Blank and Berlin and Why Control were disbanded by 1978. 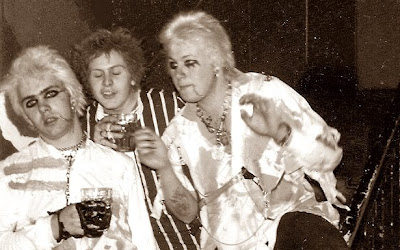 Above; The Buckley Contingent Tommy, Droopy, Hawkeye 1978
The Toilets" eventually became The Alarm, but they receive little recognition as a band stimulated by the Eric's magic. Mike Peter's and the Alarm spread what they had learned in that brick bunker around the planet.
The local art bands were talented, and sometimes enjoyable, and served to add a creative spirit to the club recipe. But for Why Control it was all about the movement and the punk energy.
There is a bigger story somewhere, and history may have swindled some of the Mathew St. magic. Maybe, someday, someone will bring it together and honor "all" of the talent created in that special place. I trust that Liverpool and the UK will recognize the power of youth creativity and we can all learn how to energize it again. 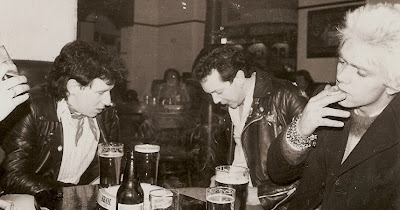 Above; Eric's Regulars Jock , Algy and Tommy
Email ThisBlogThis!Share to TwitterShare to FacebookShare to Pinterest