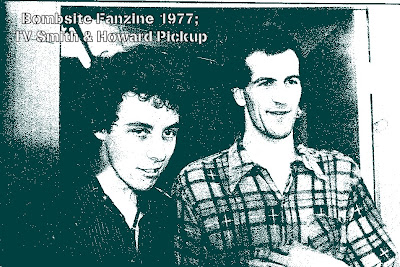 Above; The Adverts TV Smith & Howard Pickup July 7th 1977
The Adverts were formed in 1976 shortly after the first Sex Pistols show. The formula of TV [Tim] Smith's brilliant lyrics, stunning rocker Gaye Advert on bass, energetic guitarist Howard Pickup and drummer Lorry Driver was a legendary recipe. Early in the scene The Adverts played a regular spot at London's Roxy Club. Their clever lyrical content made them unique for the era, and helped them gain some commercial success.
During 1977 Bombsite reviewed The Advert's raw and enthusiastic performance supporting The Damned at Eric's, and then again headlining Manchester's Electric Circus with 999 a few months later.
Recently Bombsite discovered this 1977 photo of TV Smith and Howard Pickup [above], so I tracked down TV to ask if he could recall some stories from the early punk days. I was especially interested in his recollection of Britain's Northern scene.

Bombsite
Liverpool 2008 has reached a new milestone, and has been recognized by Europe for the honorary "City of Culture" award. Partly because of this, there been more appreciation for Eric's participation in the stimulation of youth culture during a more gloomy period for the country. On Saturday May 28th 1977 The Damned & The Adverts played Eric's club in Liverpool [Original Review Here], is there any memory that you can expand on, or recall from the location or the event?

TV Smith
We played a few times in Eric's, and the memory of them has kind of blurred into one impression of the place - a typical black-walled underground rock'n'roll club. Bigger and better laid out than the Roxy, a wide stage so people could see the bands pretty well from all around the room, a few tables to stand around at the back of the room, a bar off to one side, a small side stage dressing room that you got into through a door opening straight out into the club. One of the great things about Eric's was that they did a series of matinée shows so younger people could also get to see the punk bands everyone was talking about. The matinée kicked off late afternoon, no alcohol was served, the bands played, then everyone left, and then the club opened again in the evening for a normal club night with the same bands playing a second time. The Adverts played at least one of those - I think it was with The Only Ones, but I seem to remember that for some reason they didn't turn up for the afternoon show.

Bombsite
On August 28th 1977 Bombsite fanzine reviewed a gig night at the legendary Electric Circus [Original Review Here]. The Adverts headlined along with 999 and another band named The Slugs. Rumors that night were that the Circus was going to close. It was a Sunday night and the place was overcapacity, the local police department were watching closely for any noise and / or capacity violations. Do you recall any interesting events from that evening? Had you hooked up with 999 for a one off event?

TV Smith
I just recall the place being a crowded sweatbox. It was very claustrophobic, no air, nowhere to go if any trouble had broken out because you couldn't get off the stage. Up there with three concrete walls around you and a heaving crowd in front of you, you felt like you were in a cage. I don't think there was any violence, but I do remember it feeling very edgy, so many people crammed into the room. And Gaye told me when we got off stage that some kid had been masturbating down there in front of her. We'd never had that down in the genteel South! I think it was just a one-off gig with 999 - the bill was probably put together by the local promoter.

Bombsite
During the early years, were the Adverts aware of, or fans of, The Worst, The Drones, The Fall, The Buzzcock's or other bands indigenous to the Manchester scene?

TV Smith
We loved the Buzzcocks, saw them at the 100 Club festival in '76 and bought "Spiral Scratch" as soon as it came out. John Cooper Clark was great too, still is. I didn't like the Fall much then, though I like them a lot more now, and O don't remember coming across The Worst and The Drones at the time. In fact, as soon as we started gigging heavily ourselves most bands passed us by - we really only heard bands who played on the same bill as us.

Bombsite
Early in 1977, Liverpool punk bands included The Spitfire Boys, The Toilets, Radio Blank, The Brownshirts and the Mutants, members of these bands would inspire other local punks to advance the scene toward the post-punk era. It was this later period where Liverpool artists really shined in the global arena for a short period. David Balfe from Radio Blank ran Sony Music as General Manager and Head of A&R of the Columbia label. Mike Peters of The Toilets would later have some success with The Alarm. Norman Graveney from the Brownshirts would tour the US with The Montellas during the 80's. Were the Adverts friends with or tour with any of the Liverpool punk acts during that interesting early period?

TV Smith
We didn't have much connection with the Liverpool scene. Mike Peters told me that he was at that Manchester Electric Circus gig and found it very inspiring, but I only met him for the first time last year when I went on the Dead Men Walking tour. I talked to Pete Wylie in the bar at Erics once when I played there with The Explorers in around 1980 and he told me he came down to those Adverts gigs - I guess a lot of people who were later in bands must have been in the crowd, but if so they've been keeping quiet about it!

Bombsite
Can you describe the different feel or audience reaction playing Manchester or Liverpool verses London at the time?

TV Smith
I can't really say that there was anything particular about the Manchester and Liverpool audiences that set them apart. Geographically, it's generally true that audiences are more excitable the further North you get, so as a London band we certainly noticed that the crowd was less reserved and more willing to enjoy themselves, not just in Manchester and Liverpool, but in all the northern towns - Derby, Sheffield, Blackburn, Leeds - than in London, where the audiences could sometimes be a bit cool and posey. And to use a cliché, Northern gigs were generally "rougher." But punk even broke that stereotype - by mid 77, by the time London punk moved from the Roxy to the Vortex, gigs were just as rough and exciting as the Northern ones.

Above; The Adverts Live at London's Marquee Club 1977

Bombsite
As time passes, one of the facets of the era that is difficult for each new generation to grasp were the political and economic conditions of Britain. Can you describe the regional and national social conditions during the late 70's?

TV Smith
It's actually hard to be objective about that because the overriding feeling that I have from the era was not the outside conditions, but the internal feelings of being a teenager. I wasn't really that politically minded at the time - as far as I was concerned life was less about fighting the system, more about growing up. It's only afterwards you can put together the two and see how the general feeling that the country was in some kind of depression affected your personal outlook on things. There didn't seem a lot in Britain to offer any promise for the future to a young person - one in ten people unemployed, strikes and industrial unrest for those that were in a job.

Bombsite
How much do you believe the social conditions assisted the movement embed itself in the UK ? Do you believe that this period of youth awareness, led to a positive cultural shift for Britain?

TV Smith
Life in Britain seemed kind of hopeless at the time, and that's certainly a lot to do with the "no future" attitude of punk. We weren't boasting about having no future, like a lot of people think, we were protesting about it. Punk was a motivating force for people to protest, comment on and complain about the way things were, and had a dynamic effect on a lot of kids, because by confronting the issue they managed to pull themselves out of it. Unfortunately, on the political side, Margaret Thatcher played on the same feelings of hopelessness and seemed to be offering a way out. But the solution she proposed was "every man for himself and grab what you can" - the result was wholesale destruction of any sense of community that was left in the country.

Bombsite
The US scene obviously was an ingredient that played a part in the punk recipe. It is a passionate debate today on both sides of the Atlantic, everyone has their theory of who influenced who. Can you describe the key events that led to The Adverts forming a blistering punk formula? Was there an obvious influence, or did it feel like the thing to do? Was there an individual in the band that pushed a particular sound?

TV Smith
I certainly liked a lot of other bands, but I think The Adverts had something unique - we actually weren't good enough musicians to copy another band, even if we'd wanted to. Our sound came from the dynamics of the people in it. But like I say, we liked plenty of other bands - long before we started The Adverts, Gaye and I were listening to Iggy, Velvet Underground, Bowie, Roxy Music. Hearing The Ramones album and seeing them live was astonishing. Then later in 1976 we saw the Sex Pistols, Damned, Stranglers but by then we were already starting our own rehearsals.

Bombsite
You have toured the world and performed with some interesting artists. Your portfolio of music includes some great songs, a variety of song writing, from protest punk to complex studio work. For 2008 you have released a new album titled "In The Arms Of My Enemy" and performed at Rebellion Fest. I read that fans describe you as the Bob Dylan of punk rock. Joe Strummer, when asked this question answered "Punk WarLord, with WarLord as one word" How do you wish to be remembered ?

TV Smith
I'm not ready to be remembered, there's too many people out there who haven't even found out about me yet.

Hi TV
Thanks, I will forever be a fan. I always loved the Adverts, they left an excellent image with me from that summer. But, I will dig further into your backlog of music to see what I can find, there has to be something great, as we both graduated from the same exploding University. If you travel through Detroit or Cleveland I will be sure to find your gig.

Hi Mart,
I'd love to get to Detroit or Cleveland, but it's unlikely that I'll be able to put together any US dates in the near future. Didn't get a lot of interest last time I looked around. But if you liked the Adverts, and got what they were about, you really should check out some of the stuff I've recorded since then.
Cheers,
TV